After New Hampshire ratified the Constitution, all eyes were focused on New York and Virginia, two large and wealthy states that sat in the middle of the newly forming country. Luckily, the wait was short, and Virginia ratified only four days later, on June 25, 1788, becoming the 10th state of the Union.

Wow, with Virginia, we are now 10 states into this project, so this might be a good time to reflect on some data. To date, we have sampled 35 different beers from 25 different breweries. Of the 10 states, half have at least one product available in Massachusetts. At only 50% availability, we do not have access to a wide variety of craft beer and it will most likely get worse from here out.

When beer production started in the new colonies, brewing was a neighborhood business. At that time, distribution was geographically limited due to constraints like the lack of refrigeration, and poor road networks for shipping. In the modern global economy, where businesses like Amazon can have a book on our doorstep the next day, it is hard to grasp the fact that we can’t get beer from other states. This project has started to make clear that the craft beer industry is still mostly a regional business.

This raises the question, what influences what beer is available where? The logical thinking would be that as a brewery grew, its distribution range would spread out in an expanding circle from the brewery, as it might have in the colonial days. Following this pattern, a beer from Virginia would first expand to neighboring states, like North Carolina and West Virginia, prior to getting in a state like New York, or Massachusetts. But so far, the data doesn’t help craft that story. 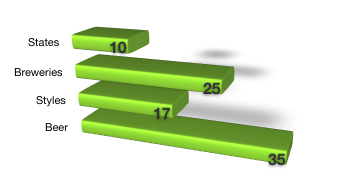 Some statistics at the end of week 10. 17 styles of 35 different beers, from 25 breweries.

Using the website DistanceFromTo, I calculated the distance between Massachusetts and every state covered so far. And while beer from Georgia, the farthest state away so far is not available in Massachusetts, neither is beer from Connecticut, which is a border state. When prohibition ended, the alcohol laws in each state became vastly different, and these different controls really impacted the overall distribution system. This disruption to the distribution system is becoming more apparent as the project continues.

Virginia, 516 miles away does not have any breweries that sell beer in Massachusetts so I had to bring some back from the road trip. Virginia has a total area of 42,774 square miles, and for some reason, it really never seemed so large to me. Probably because most of my experience with the state involved driving down its eastern seaboard towards North and South Carolina. So imagine my surprise the first time I drove Interstate 81 from border to border. This section of highway feels endless. Travelling as co-pilot on the most recent trip back, I was recounting the journey on Twitter with tweets like:

Driving 81 across Virginia should be part of a Mars mission training. Of course the Mars trip is shorter and more scenic.

Never been so happy to see ‘Welcome to West Virginia’ sign.

Surviving a long car trip (this one was 23 hours, one way), requires stamina, coffee, good conversation, coffee, and an iPhone full of music. One thing that makes for good conversation is interesting scenery, and drives like this are never a let down. And this trip was no exception, with its 75 foot tall crosses on hillsides and giant cow statue standing watch over a baby Jesus in a nativity. However we always find the Virginia stretch to be pretty bland, and wanting for something interesting to discuss. So it was, on the journey south, at about midnight that we saw a sign for Devils Backbone Brewery, next exit. That sign, the first (and last) that we saw on the highway for a brewery, gave the rest of the nights drive a purpose. Given that it was the middle of the night, we figured the brewery wasn’t currently open, so with a fresh cup from Starbucks and Tom Petty coming out of the speakers, we set about finding Devils Backbone beer on the return trip through Virginia.

On the northward drive, the search was on for locating Virginia beer, and more specifically, something from Devils Backbone. It wasn’t until we got to Blacksburg Virginia that we finally found a place populated enough to possibly have a craft beer store. Being a college town, home to Virginia Tech, our chances for finding beer were much higher, so we were excited. One observation that we made earlier in the week was that the Walmart’s in the south actually had a small, interesting selection of craft beer. And so there we were, on a Friday night in Blacksburg Virginia, searching the shelves of Walmart for Virginia beer.

Nestled between the expected Walmart big name, flavorless brands, we discovered two different Virginia breweries. Starr Hill and Devils Backbone. Victory! On that particular evening, all we found were IPAs from both breweries. So this week we will be sampling interesting Virginia IPAs

The first beer we cracked into this week was the Northern Lights IPA. Drinking two different IPAs back to back really provides insight into the variety of this style of beer. In this case the differences were very apparent. In this glass, this beer looked a bit darker than most IPAs. It had an almost honey color to it. And the smell was of sweet citrus. The taste was also sweet. Much sweeter than I have ever tasted in an IPA, and all the others at the tasting agreed. As expected with an IPA, there was a bitterness from the hops, but the sweetness (maybe from the malted barley?) was the defining characteristic of this beer.

The next beer we opened was an Eight Point IPA from Devils Backbone. The beer had a great smell, very piney, a characteristic that I personally love in an IPA. This beer was excellent. It was much hoppier than the Northern Lights, and overall had more structure. Well loved by everyone in the group, and a few bottles were consumed during the tasting.

Next week, we move into New York, and it is building up to be a special tasting. Come back and read about it.

One thought on “Virginia: Virginia is For Lovers”